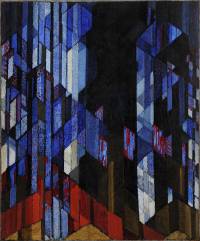 Projection is a way of representing three-dimensional space in two dimensions. There are numerous types, but they can be broadly categorised as:

Wikipedia has good descriptions of all these kinds.

2-D videogames often use a strict form of projection. Most common is the 'top-down' form of oblique projection, seen in things like RPGs, as this suits the way a screen is composed of square tiles. When games use a form the uses a diagonal grid they use 'isometric' as a catch-all term, though I reckon dimetric and military styles are at least as common. Often characters in these games will be restricted to diagonal movements, and the awkwardness of these being an important mechanic in some action/adventure games. Specific identification becomes a little tricky due to the variations of screen size across region and generation, as well as the sometimes irregular dimensions of pixels. Perhaps most common beat-'em-ups is cavalier.

Games Categorised by their Projection Type

For games using their own perspectives, or where parts are rendered in conflicting types.

Except where otherwise noted, content on this wiki is licensed under the following license: CC Attribution-Share Alike 4.0 International