Dungeon Land is a maze-based game, released by Enix, in 1992, for the Game Boy.

The game was released in Japan only, and Japanese knowledge would be beneficial. It's easy enough to fumble your way through the menus and play the game, but there are a lot of menus that I can't differentiate, as well as items to identify. 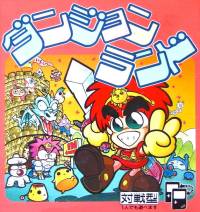 For a single player the game can be tedious. Each player—be they CPU, or human—takes turn to navigate a maze. The maze is displayed in a 9×9 square grid, with each square hidden from view. In each turn the player reveals one square at a time, until either they reach the end, or they uncover a wall. This trial and error wrapped repetition has little to break it up: real-time battles, treasure chests, etc. With another human player it can be a lot of fun, though! Particularly the mode where each player builds the maze the other player will navigate.

The versus mode can be played either hot-seat against another player, or versus the AI. Players can play on randomly generated maps, but, most interestingly, players can build their own (as mentioned above).

In the story mode the player has a world map, which allows several paths to progress. Stages are against characters (which are visible on the map) which may have different behaviours. In the stages there are treasure chests, which can have positive, or negative, effects. When a stage is beaten money is earned, which can be spent at shops.

From what I can figure here the player can edit computer generated maps, or start from scratch. There are different tile sets to select from.