Aussie Rules Footy is a videogame for the Nintendo Entertainment System developed by Beam Software. It was released on June the 1st, 1991, in Australia only.

'Out of bounds on the full'

The most enduring element of the game has proven to be the boundary umpire. More specifically the digitised sample that plays when the ball travels 'out of bounds on the full'. The ocker accent of the umpire made it a popular playground meme of the day, and the quote is still memorable to people of that generation, even those who are no longer interested in videogames.

The voice was provided by Gavan Anderson. 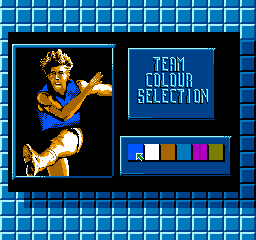 There are 18 teams included in the game. The Perth, Hobart, Darwin, and Canberra teams are fictional, though Perth is, I assume, a misnamed West Coast.

Obviously the real guernsey designs are not able to be reproduced in-game. Beam, instead, allow the player to select from six colours. Five are standard across all teams, with one, more accurate, colour on the left. See figure right for North Melbourne's example.

Listed below are the teams, their colour, and their actual club colours:

* Note that this blue is slightly different than the one in the default palette. (see fig. right) 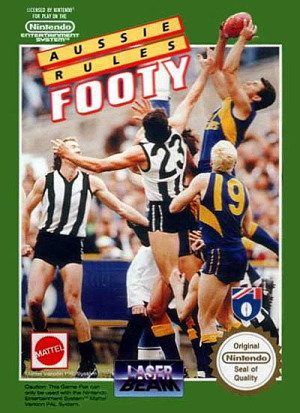 The credits shown once a season is completed list names without roles.
Here is how they appear, in-game. The known roles are indicted within brackets:


With special thanks to